A bit about penguins

Well, yesterday's post confused a few folks so I am here to set the record straight and provide some fun natural history factoids.
First of all, the photo was not, in fact, of current visitors to the Antarctic Peninsula. It is a photo of me and my mother, in matching shirts, no less, on Boulders Beach in Southern Africa, looking at Jackass Penguins in 1997. Fooled ya, eh?
Here's the scoop on penguins of the world: While they are restricted to the southern hemisphere, they are not restricted to Antarctica as nature shows and movies might have you believe. They nest in Australia, The Falkland Islands, New Zealand, South Africa, Peru, Argentina, and Chile, as well as Antarctica.
If you visit the Oregon Zoo you will see the Humboldt Penguin, a species that nests on the rocky shores of Peru and Chile. 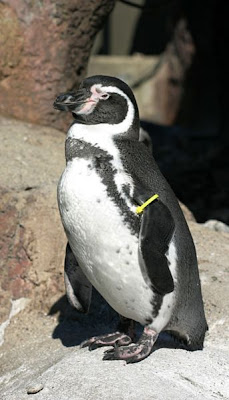 The smallest penguin is the Little Penguin (about 16 inches tall), a resident of southern Australia, New Zealand and Tasmania and a species I had the pleasure of seeing in person in 1989. It was quite the tourist attraction.....the public sits on bleachers while from out of the ocean march tiny little penguins who walk right on by you on their way to their burrows. Much braying and mooing takes place as mates reunite. 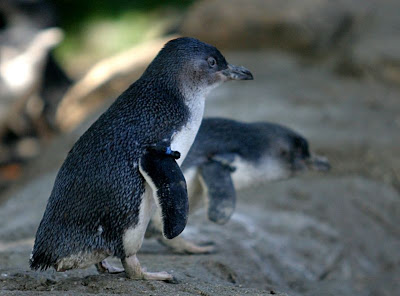 The largest species is the Emperor Penguin standing just over 3 feet tall. 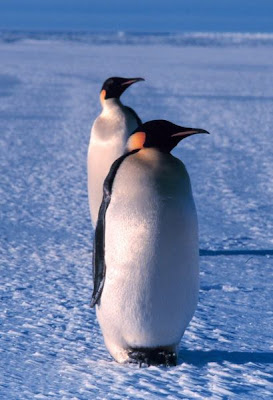 This is who we got all weepy about in March of the Penguins. Or was it the King Penguin? Either way, this bird deals with some hellish weather.

Wow, okay. Thanks. That totally helped clarify. I was one of the misled, thinking ALL penguins were of the stoic, long-suffering Emperor variety (no, I didn't get weepy--amazingly--during "March of the Penguins," but REALLY did during "Wild Parrots of Telegraph Hill." Sigh.)
What would I do without my dear BirdNerd to set me straight about the avian world? :-)

Don't forget the one that nests in the Galapagos, right on the equator in the aptly named Ecuador!
P.S. It was the Emperor.