When I introduce myself to a new session of beginning birders, I refer to the summer of 1987 as "the summer that changed my life." I was attending Lewis & Clark College, majoring in biology, and had mostly been interested in studying whales prior to arriving in Portland and finding that maybe that wasn't the best use of my time at a liberal arts college not located next to the ocean. One of my bio profs told us about summer internships available at California's Point Reyes Bird Observatory (now known as Point Blue) just north of San Francisco. Sure, I knew that place! I grew up in Berkeley, about an hour south, and had spent lots of time at Point Reyes as a child. I applied, and for some reason they accepted me, even though I could barely tell a sparrow from an eagle.

I had two jobs during my stay at the Palomarin Field Station. One was to run the mist-net system spread over several acres of oak trees, grasses, and coyote brush. We hoisted the 14 nearly invisible mist nets like a ship's sails every morning, checked on them every 30 minutes, untangled caught birds and brought them back to the lab for weighing, measuring, and most importantly, leg banding. The final step was to clasp a numbered metal ring around the bird's leg (left or right, I can't recall). This way, if the bird was recaptured, its trail could be followed through its unique band number. Same if the bird was found dead. All the North American banding data is stored at the Bird Banding Lab at the USGS Patuxent Wildlife Research Center in Maryland. If you find a band, you can report it online and find out the bird's history. Why is this important information? Banding data helps us understand migration patterns and timing, distribution and success of breeding birds, as well as how long birds can live. The oldest known Laysan Albatross, Wisdom, was banded as an adult 63 years ago! 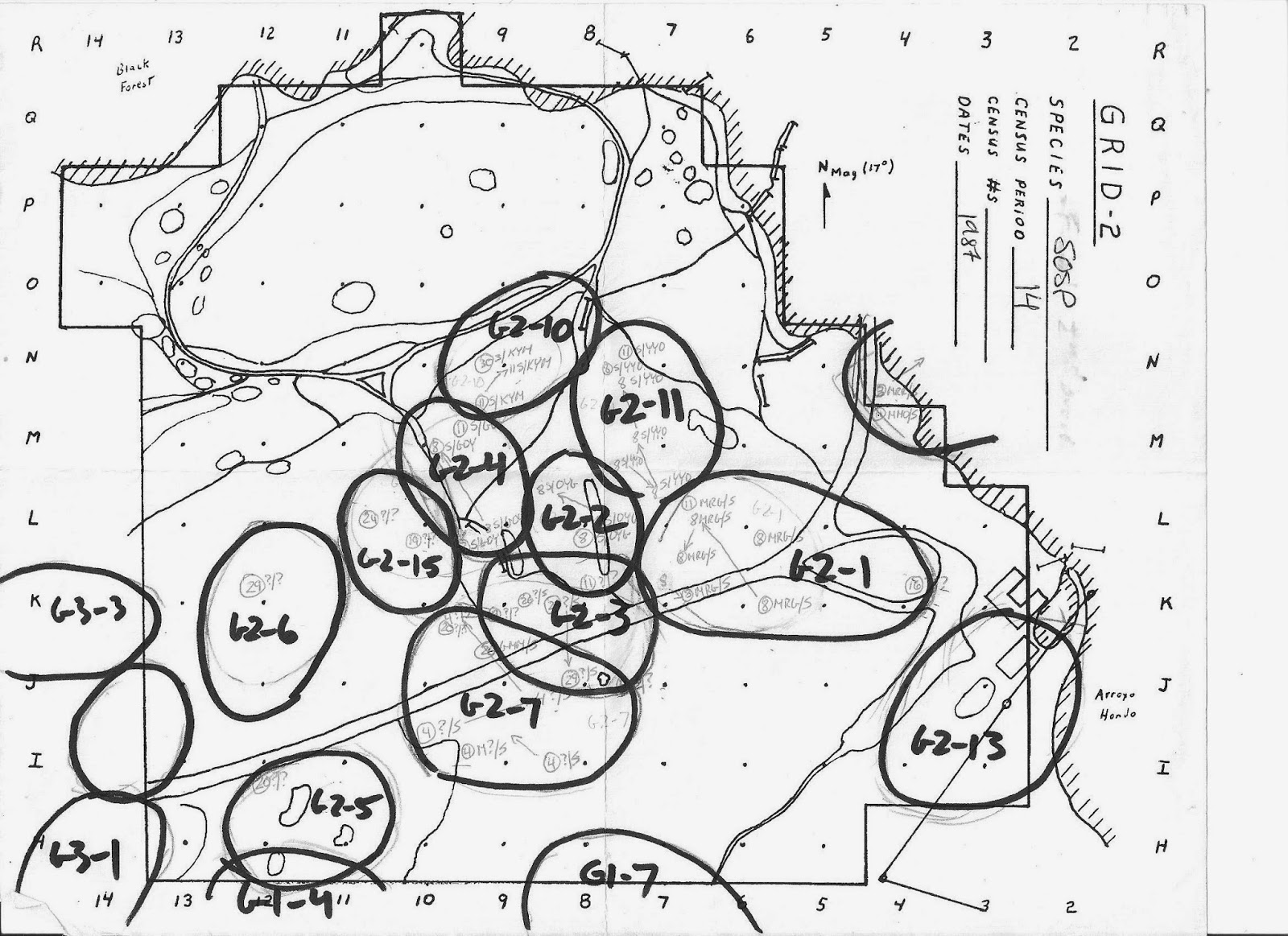 My other job was to survey Grid 2, the area pictured above. The bird observatory has run a breeding bird survey program here, and on three other grids, since 1966, and has amassed an extraordinary amount of information on breeding birds of the area. Every morning I traversed the grid, which was thick with dense coyote brush and chaparral, watched for target species singing from perches, and mapped their color bands and location. Any time a target species, like a Song Sparrow, was mist-netted, it was given a unique color band sequence so we could ID it as an individual. Thus, my birds had "names" like MRG/S meaning on its left leg was a Mauve, a Red and a Green plastic band and on its right was a silver metal band. The map pictured is the result of my logging the singing perches of individual male Song Sparrows as they patrolled their patch, defending it from rivals. G2-1 belongs to MRG/S while G2-11 belongs to S/YYO. Think about this the next time you're walking through Song Sparrow territory, and realize how close they come to each other, and even overlap. 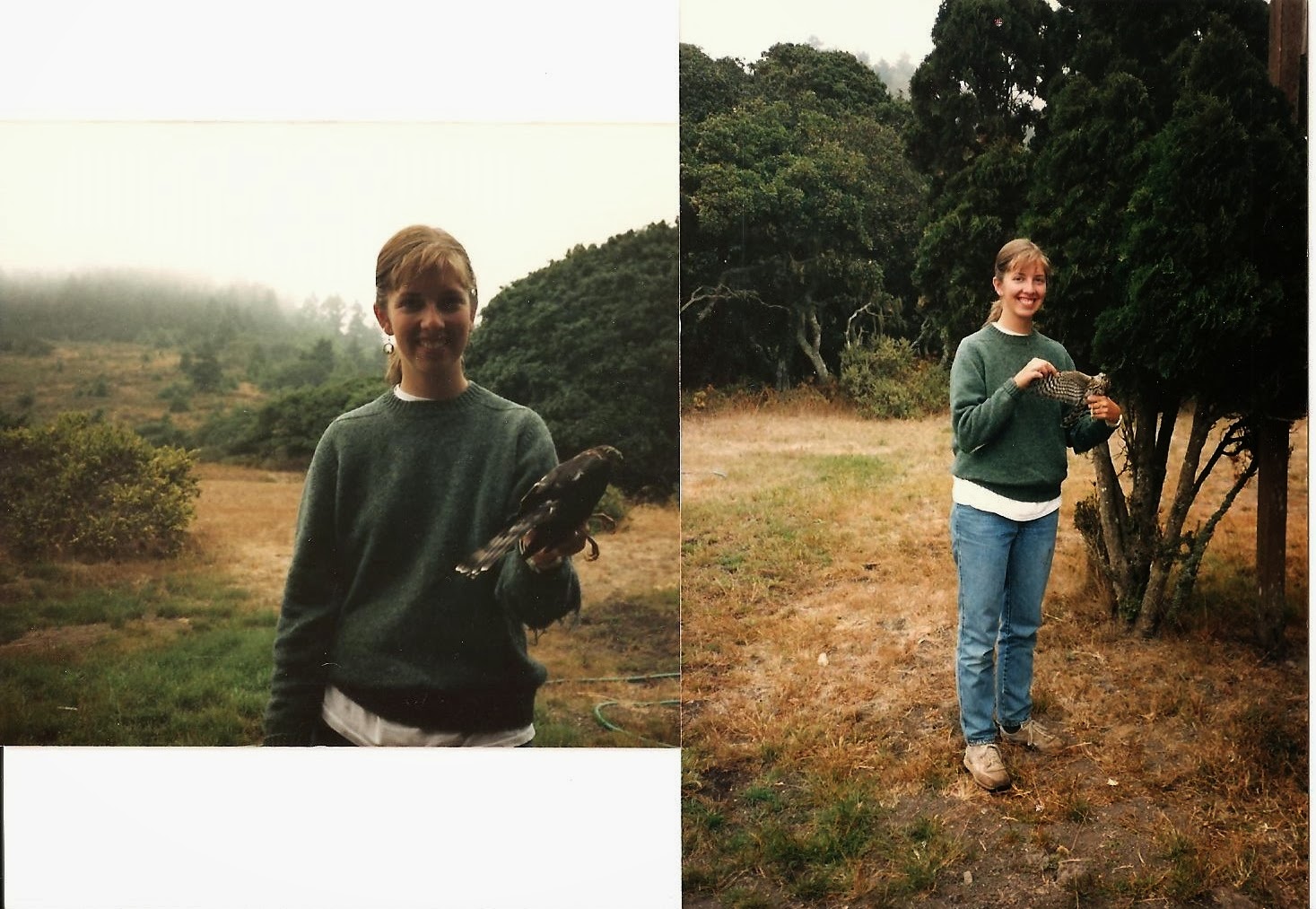 And finally, here is yours truly at the tender age of 19 holding her first Sharp-shinned Hawk. Mist-netting wasn't always about small birds--we got this guy, a juvenile Saw-whet Owl, and even a bat. Banding birds gives you a tremendous appreciation for the variation in birds' personalities. Some were shy, some were downright badass, and most were smaller than my fist.

Before the summer of 1987, I couldn't tell you what a Song Sparrow or Wrentit sounded like, but suddenly it was my job to track them by their songs! I saw and handled many birds that summer, found a Wrentit nest on my birthday, learned all those birdsongs by heart, and learned a ton about communal dorm living. I returned to college, hung out with birders who knew far more than I did, and finally set aside my dream of studying whales in favor of these far more accessible birds. If you ever get a chance to band birds or watch it being done, DO IT! There is no place like Palomarin in Oregon, but California is just down the road--check it out this summer when the Wrentits are be-bopping away and the White-crowned Sparrow's song echoes through the fog.

Nice post. You look so happy doing that work!

I was just thrilled that I successfully removed that hawk from the nets without using gloves. I actually had no idea it was a hawk when I found it-didn't know they came that small!

Back in the day I worked on a similar project in Arizona for Tom Martin. He and Geoffrey Geupel wrote the book (a paper, actually) on nest searching.

If you haven't already read it, I highly recommend "The Singing Life of Birds" by Donald Kroodsma ... I often woke up at 4am just to read it for a few hours. Currently enjoying Max and Sarah's book "Must-See Birds" & of course check in on Jen's Blog "iusedtohatebirds" to see where the action is.

Thank you Laura for sharing this! I was a banding intern at Palo in 2004 and am now a full time Education and Outreach staff at Point Blue. I am sharing this on our Facebook page next week, but was also wondering if you'd like to share it on our Palomarin Blog (www.pointblue.org/blog/palo). Let me know! You can contact me at larata@pointblue.org.